Causes And Cure of the Over-The-Top Move

Click here to go back to the index page

I have just completed my first swing video lesson on the topic of the causes and cure of the OTT move. Because the swing video lesson lasts approximately 76 minutes, it is too large for my personal website. I have therefore posted the swing video on U-tube [1] in 8 separate segments - because U-tube doesn't allow a posted video to last longer than 10 minutes. After viewing the first 10 minute segment, you should proceed to read the 2nd segment, and subsequently complete the viewing process by viewing all 8 segments in the correct sequence. I have not compressed the swing video, and I suspect that viewers will need a high speed internet connection to view the video segments without frequent interruptions (due to a slow internet connection).

I have presented the swing video lesson unedited - because I do not presently have any video editing skills to edit the completed video lesson. My video production is obviously very primitive because I used a $300 camcorder indoors in a friend's family room. I also used the microphone that is inbuilt into the camcorder and the sound is therefore very hollow, resonant and at times poorly audible. Because I do not know how to edit video material, this video lesson is totally unedited. I produced it with only one break after part 1, in order to change tapes in my camcorder. I made a number of statement-errors in my lesson, and I let myself get side-tracked at times. I also forgot to include a number of important points that I originally wanted to include in this lesson. I couldn't correct any of these problems afterwards because I have not yet learnt how to edit video material. I, therefore, apologise for these faults. Despite these errors, I still think that the video lesson accurately reflects my personal opinions regarding the causes and cure of the OTT move. My personal opinions are not arbitrary. They are the result of my substantially increased knowledge re: golf biomechanics. When I started this website 1 year ago, I summarised the golf instructional material of many famous golf instructors, and I presented the information in chapter format. Since then, I have used my background knowledge of anatomy (as an ex-physician) to bettter understand the biomechanics of the golf swing in a way that is far more comprehensive than the ideas/opinions expressed in standard golf instructional books. That additional knowledge has led me to come up with new ideas about the way the  human body should optimally move during the golf swing. In this video lesson, I will be presenting this new material regarding the correct backswing and dowswing movements, and that new material cannot be found in my backswing and downswing chapters. This new material on the biomechanics of body movements during the backswing/downswing should be very informative for beginner golfers who are trying to learn how to move their body/arms/hands in space during the golf swing. My target audience, as always, is beginner golfers, and I hope that they will conclude, after viewing my 76 minute video lesson, that it was a worthwhile experience.

I ws initially reluctant to make swing videos using myself as a role model, because I regard myself as an imperfect golfer - imperfect in the sense that my body will not perform according to the mental picture that I hold in my mind. The reason for my imperfect golf swing is that I only started to play golf in my mid-50's and I lack the flexibility to perform the golf swing well. In particular, I cannot straighten my left arm during the backswing due to a lack of flexibility (see the appendix for an explanation as to why I cannot straighten my left arm). However, I am now increasingly confident that my website's visitors will ignore these imperfections and realise that my knowledge of the golf swing far exceeds my ability to execute a perfect golf swing. In fact, many beginner golfers should take encouragement from the fact that if I can regularly break 80 with my imperfect golf swing, that they could accomplish the same level of scoring performance if they are willing to learn as much as possible about the fundamentals of golf - and that's what my website is all about!

I am providing a list of the inadvertent statement-errors, and missing points, that I made during that video lesson.

No major statement-errors. Unfortunately, I forgot to demonstrate an important issue. I was going to demonstrate how one can use the right hand to push down on the left hand while the left arm is swinging freely across the front of the body (like a child swinging in a swingset). The push should only occur in the mid-downswing, and not the early downswing. It is possible to significantly increase left arm swing speed, and therefore clubhead speed, by adding extra push-power with the right hand - as long as the push occurs at the correct time and with the correct amount of force and if it is in perfect harmony with the pulling force exerted via the left arm. If I produce another video segment (segment 9) I will address this issue in the added segment.

At time 8:40 minutes into the video segment, I stated that one cannot pivot because of the way the left hip joint is anatomically structured - with the left femoral neck at a 45 degree angle to the left femur. That was a slight statement-error, because one can obviously pivot backwards during the left hip clearing action, but I meant that one cannot pivot backwards over an imaginary vertically-oriented femoral head. I am trying to dispel the myth that the left hip clearing action is a rotary movement of the pelvis over a fixed, vertically-oriented, femur (thigh bone) when it is actually due to a re-positioning of the left femoral head, and therefore pelvis, due to movements of the upper left femur, which spirals counterclockwise (as viewed from above) as it gets displaced right-backwards.

At time 7:56 minutes into the video segment, I stated that that there was a little hinge in the right wrist at the address position. I should have stated back-hinge (dorsiflexion of the right wrist), rather than hinge, because the right wrist can either be hinged forwards (palmar flexed) or backwards (dorsiflexed).

At 8:52 minutes into the video segment, I stated "I started my shoulder move". That's an incomprehensible statement. I should have stated that "I started the downswing with a right shoulder movement that was too much OTT in the direction of the ball-target line".

At 1:25 minutes into the video segment I stated that the left femoral head is at a 45 degree angle to the femur. That's a slip-of-the-tongue error. I meant the right femoral head.

At 2:23 minutes into the video segment I stated that the angle at the back of the left wrist gets more convex when the hands are centralised in the address position. That's a slip-of-the-tongue error. I meant more concave.

At 3:40 minutes into the video segment I stated left shoulder. That's a slip-of-the-tonge error, and I obviously meant the right shoulder.

At 5:14 minutes into the video segment I stated "late thing" when I meant to say late backswing.

1. Primary reason why I cannot straighten my left arm during the late backswing.

Most people (golfers and even golf instructors) think, when they see a bent left arm during the backswing, that the primary problem is an incomplete upper body turn. That often is the cause, but it doesn't apply to me because I can achieve a 90 degree upper body turn during the backswing, which is sufficient. I can also get a 45 degree hip turn, so that is not the limiting factor. Therefore, there must be another factor. What many people do not consider is the degree to which the left scapula slides across the back during the shoulder turn. It should slide about 6-8" laterally (towards the front) and that brings the left shoulder socket well forward. Look at Ben Hogan in this next photo. 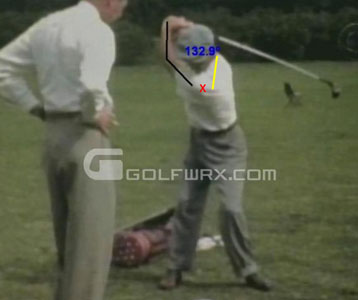 The yellow line roughly represents Hogan's upper body turn angle, which is 90 degrees +. More importantly, look at point X - that's the position of the left humeral head. Note that Hogan can get his left humeral head ahead of his shoulder turn angle, and that allows him to approximate a straight left arm to his chest wall. I cannot get my left arm to lie along my left chest wall - like Hogan - and the reason is that I cannot slide my left scapula forward enough. If you study photos of my swing, you will see that my left humeral head is well behind the shoulder turn angle. There is approximately a 4" limitation in the forward movement of my left shoulder socket, and therefore left humeral head, and that's my primary problem. My left arm bends because if the left shoulder socket is too far back by about 4", then the origin (point of attachment) of the biceps muscle is further back by 4" and that pulls the left elbow into a bent position as the left arm moves further around in the direction of the right shoulder.

Therefore, when a golf instructor evaluates a student golfer for reasons why the left arm bends in the backswing, he should not only consider limitations in rotation of the upper torso around the spine - he should assess how much the scapula slides across the chest wall. If a golf instructor doesn't know how much the left scapula should slide across the chest wall, and has no method of assessing whether the amount of slide is normal/adequate, then that represents a gap in his knowledge which should be remedied.

Regarding the reason why I have a marked inability to slide my scapula across the chest wall, I think that it relates to the fact that I never played golf when I was young (which helps to stretch the muscles surrounding the scapula (peri-scapular muscles) and I therefore have over-tight/fibrotic peri-scapular muscles. Unfortunately, I didn't do any other upper body exercises, like swimming or gym stretching exercises, during the ages 20-55. I only used to exercise my lower body - I was an avid jogger/cyclist. I am now suffering the consequences of insufficient upper body exercise-stretching during my youth and middle age. I am now trying to remedy the situation by doing peri-scapular muscle stretching exercises everyday, and I hope to see some benefit within 1-2 years.

1. Causes and Cure of the OTT Move Swing Video on U-tube.

You can click on the first video segment. After viewing the first 10 minute segment, click on the "More from: Imperfect Golfer" at U-tube, and you will see all my videos listed there. You can then click on the rest of the segments and view them in sequence.